American song heritage is rich with accessible songs for children and oftentimes tell silly stories or have silly themes that children can enjoy.  Students learned about the history of American Folk music, drawing a connection to Folk tales, being passed down from generation to generation.  Knowing this, we learned that there are many variations of each song and in the case of an American Play-Party, many variations of movements or actions too.  The American Play-Party started in the 1830’s to get around strict religious beliefs that banned dancing and playing instruments, especially the fiddle.  Play-parties were a way for neighborhoods to gather and meet.  The songs at the play parties were performed with actions or movements that seemed more like a children’s game, althougth, some of these actions were similar to some modern traditional square dance patterns that became more popular in the 1950s.

Students all learned various Orff arrangements to accompany themselves, the play-party games, folk songs, singing parts, and speaking parts.  Mrs. Wilkins took note of where each student really excelled, assigned each student a special concert part and encouraged each student to rise to high levels and improve as we prepared each piece for the concert.

Students learned about performance etiquette and worked so hard to achieve the level of a “professional 3rd grade musician.”  Upon completion of the concert, students have been viewing a concert recording to reflect as a performer, because it’s important to know what we did well, and what we can improve on for our next performance.  Students learned the importance of singing with clear diction and being a song story teller with our facial expressions, because it is so important that our audience can understand and view the story we are singing.

We are so proud of our third grade students! 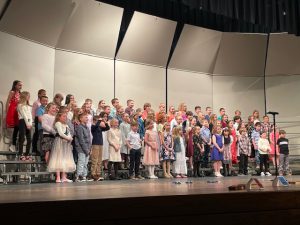 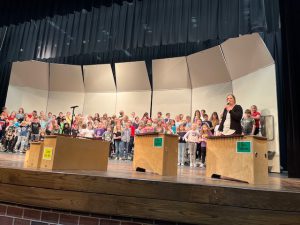